ENCINITAS - Three women killed when a Southern California sea cliff collapsed where members of a family gathered on a beach to celebrate one of them having survived breast cancer, authorities and relatives said Saturday. Anne Clave, 35, and her mother, Julie Davis, 65, died at hospitals after tons of sandstone were unleashed Friday at Grandview Beach, the San Diego County Medical Examiner said. The victims were part of a family gathering celebrating Cox surviving breast cancer, the email said. Cox died instantly at the scene, the email said. Her age wasn’t given.

The three women leave behind spouses, children, and many members of their extended families. Officials on Saturday reopened much of the popular surf beach that was closed following the tragedy. Geologists were on scene Saturday assessing the area around the collapse zone. Homes on top of the cliff were in no immediate danger. A lifeguard reported feeling and hearing the thud as the dense dirt landed on the beach. Lifeguards and beach-goers scrambled to the towering pile of debris, estimated to weigh tens of thousands of pounds,  to help search for victims. The woman died at the scene, and two more people later died at hospitals.

Another person was taken to a hospital, and a person who had minor injuries was treated at the scene, officials said. Search dogs were brought in to hunt for other possible victims, and a skip loader was used to move the dense, heavy debris. No other victims were found.

Suburbs north of San Diego have long contended with rising water levels in the Pacific Ocean that pressure bluffs along the coast. Some are fortified with concrete walls to prevent multi-million-dollar homes from falling into the sea. Long stretches of beach in Encinitas are narrow strips of sand between stiff waves and towering rock walls. People lounging on beach chairs or blankets are sometimes surprised as waves roll past them and within a few feet of the walls. 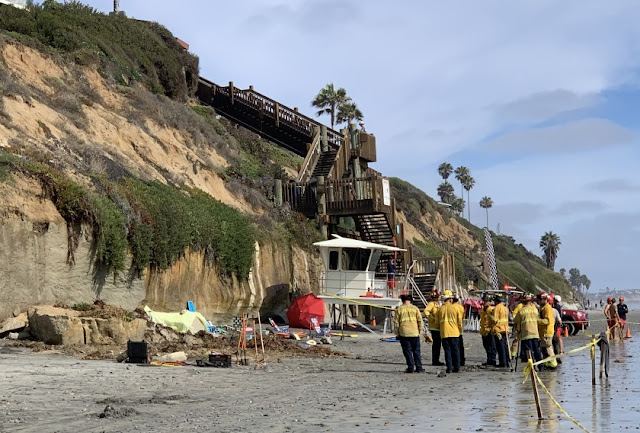